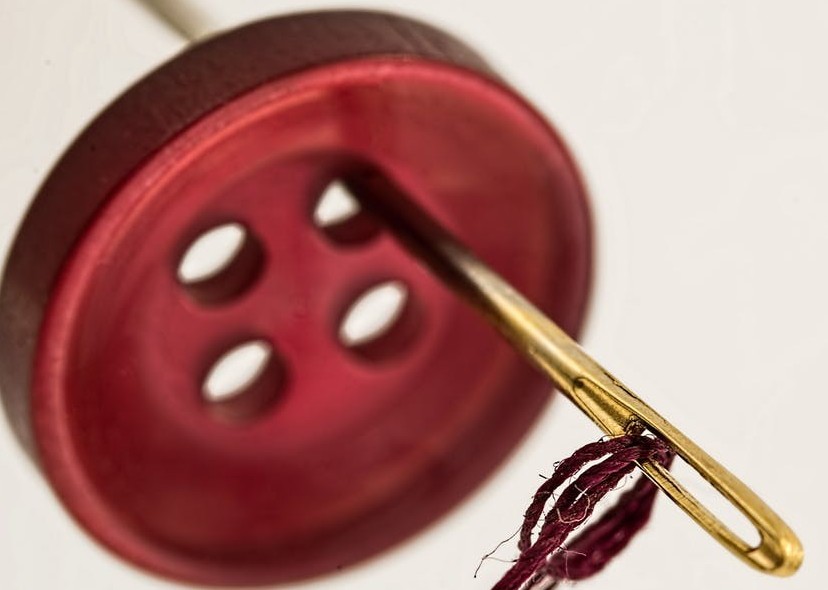 Let’s take a look and see how sewing history and sewing as an art has evolved over the century’s.

As you know I love my crafts, and although I am not great at sewing, it is something I like to dabble with. I don’t really enjoy sewing clothes, but love to quilt and make toys and household items.

Sewing is a centuries-old art that involves the fastening of leather, cloth, fur, bark as well as other flexible, pliable and bendable materials. Archaeologists have discovered ancient sewing materials that date back to as early as 30,000 BC. This process is referred to as tailoring or stitching.

Although some ancient sewing needles found date back nearly 25,000 years ago, during the last ice age, Chinese archaeologists found something interesting that dates back to 202 BC. Sewing needles, along with the oldest thimbles in recorded history, were found in the tomb of a government official from the Han Dynasty.

Even in ancient history, sewing was an important part of life– and more advanced than we might think.The first sewing needles were likely made of bone and were used to sew furs and skins. 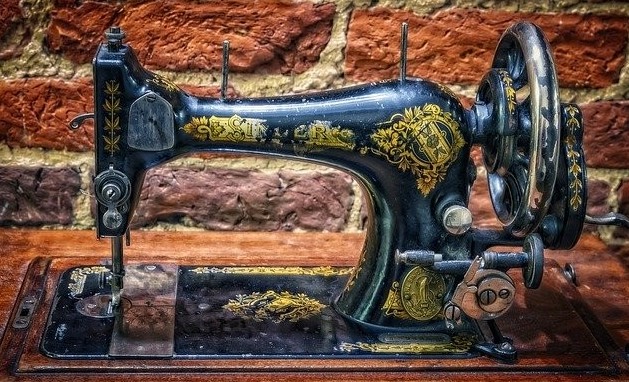 Due to the Crusades, Europeans encountered many other cultures. As a result, in about 1200, Europeans began to use buttons and button holes to fasten their clothing. Soon after, buttons became a driving force in the clothing industry in Europe.

In 1730, cotton thread was first spun by machinery in England. This introduced cotton thread to a much broader audience, and it spread across the British Colonies and the world at large.

In 1730 Stephan Beissel started an early needle factory in Aachen Germany, a town then famous for its needle-makers guild.

In 1790, the English inventor Thomas Saint invented the first sewing machine design, but he did not successfully advertise or market his invention. His machine was meant to be used on leather and canvas materials. The first truly functional machine was created by Barthelemy Thimonnier in 1830.

In 1776 Betsy Ross sewed the first American Flag. She was a wonderful and well-known seamstress for George Washington at the time.

Brass buttons were a strong commodity throughout the 1800s, and are still used in sewing to this day.

During the war in 1812, England was being blockaded by Napoleon’s warships, which led to a silk shortage.

The English were a nation that were very used to luxury goods and this embargo found them in quite a bind.

Enter James and Patrick Clark of Clark and Co, based out of Paisley, Scotland in 1812. The Clark family came up with a way to twist cotton threads together, producing an excellent thread for sewing. Their thread was the first mass produced material for sewing.

In 1830, Barthelemy Thimonnier was awarded a patent by the French government for his sewing machine. Though he initially imagined an embroidery machine, he found its true purpose as a sewing machine. 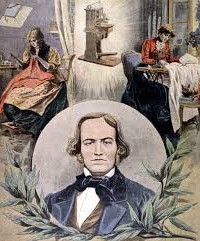 It was built out of wood and used a barbed needle. At some point he had a factory running with 80 of these machines and he also sold these machines for commercial use.

It was practical and efficient, used a barbed needle, and was built almost entirely out of wood. At some point, he had a factory running with 80 machines. He also sold his sewing machines for commercial use, and ran one of the first-ever garment factories, throughout his life.

Barthelemy Thimonnier had his fair share of detractors. Many French tailors were afraid Thimonnier’s invention and his factories spelled the doom of their livelihood.

On the 20th of January 1831, sadly, some 200 hungry and fearful French tailors set fire to Thimonnier’s factory and his mostly-wooden sewing machines. It is reported that Thimonnier never fully recovered from the after-effects of this riot.

You can read more about the life of Barthelemy Thimonnier here.

In 1834, Walter Hunt created the first lock stitch sewing machine. Hunt’s sewing machine is said to be the first that didn’t mimic the movements of the human hand– instead, it was a curved, eye-pointed needle machine that passed the thread through the fabric in an arc motion. On the other side of the fabric, a loop was made while a second thread, carried by a shuttle, ran on a track and passed back through the loop. The lock stitch was born.

In 1844 Elias Howe, from Massachusetts, invented the first modern sewing machine. Unfortunately, the machine didn’t catch on immediately, even though it amazed people in sewing competitions, where it out-sewed some of American’s finest tailors.

Howe left America for England to sell his design, which did not end well. When he returned to America, he found several entrepreneurs, including Isaac Singer (yes, that Singer), making money off of his patent. Though Howe eventually made his fortune, it was a hard-won battle.

On the 12th of August 1851, Isaac Merritt Singer patented what’s known as the first modern and practical sewing machine. Though patent and legal disputes abounded around this time, Singer was eventually able to formalize an affordable payment plan for his machines, bringing them into many American households. 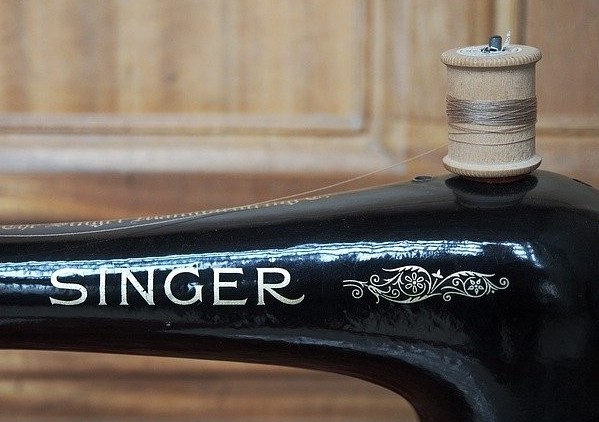 In 1874, Husqvarna started to produce its own sewing machines. Before this they were producing riffles but had to adapt during non war times. They also started making pots, pans and bicycles.

The year 1880 marked the first time in recorded history an electric motor was affixed to a sewing machine. These motors were added to retrofitted sewing machines, invented and implemented by Philip Diehl, a contractor who worked for Singer.

In 1889 Singer started to sell their electric machines to the public for household use.

Sewing is primarily done to craft different types of clothing, bed sheets and bed spreads table linen and different types of upholstery. Sewing can be done on materials such as canvass and leather, and is used to fashion out banners, bellows and sails.

Since most of the early sewing methods were exclusively done by hand, the most common tools were the needle, pattern and the thread.

Basically there are two types or categories of sewing: Plain and fancy sewing.

Plain sewing refers to a more functional type, which is used to stitch together household items or clothes and linens.

Fancy sewing involves more complex processes, and is mostly a decorative form of sewing. Among the fancy sewing methods included quilting, embroidery, shirring and others.

Before machines came into the picture, sewing was a purely home craft. Many individuals sew clothes and other items for themselves, as well as for their customers. They performed simple tasks such as repairing torn or loose seams, or putting back into place a loose shirt pocket or button.

How the Industrial Revolution Changed The Art Of Sewing

The art of sewing underwent a massive face lift during the Industrial Revolution, with the invention of the sewing machine.

With the use of the first sewing machine, garments were tacked together into the machine. The sewing machine was equipped with a set of gears and tools that pierced the thread into the layers of cloth, and secured the locks of thread into place.

The development of sewing machines made the process much faster, and enabled clothing manufacturers to produce more volumes of clothes and household items, as well as hire fewer workers.

In the late 80’s Israeli designers introduced the first-ever computerized sewing machine. As more technological advances were introduced, sewing machines become much sharper and were much capable of doing extra complex tasks. The sewing machines of today utilize tools such as sequential cams and stepper tools, which are used to churn out more creative patterns and sleeker designs. Most of the sewing machines today are made in Asia too.

The modern sewing machines are adept at making a wide array of patterned stitches, and around three-dozen unique stitch formations have already been recognized by organizations like the International Standards Organization, or ISO. The two major stitches that sewing machines make are the lock stitch and the chain stitch, while the other variants are considered as derivatives of these two major types.

Most electronic sewing machines are manufactured to move in such a manner that different types of fabric easily glide or move in and out of it, and removes the hassles encountered with moving thimbles and needles, and also removes the need to use other items commonly used in hand sewing.

Sewing Is A Highly-Specialized Art Form 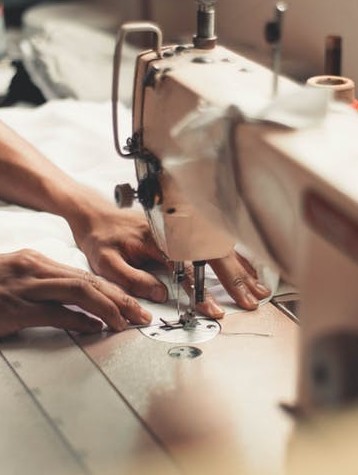 While most of us may think that sewing is only applicable for semi-skilled workers, and is often viewed as a menial job, in truth it’s actually a more complex profession.

Expert sewers must possess the skill to make patterns, flatten sheets of fabric or cloth and curve, fold and bore holes and stitch them into creatively fashioned, smooth and ripple-free designs.

Expert sewers need to master the art of aligning and orienting patterns that are to be woven or printed into different fabrics.

Please feel free to add your comments to this article on Sewing History and the art of Sewing.

4 thoughts on “Let’s Look At Sewing And Sewing History”