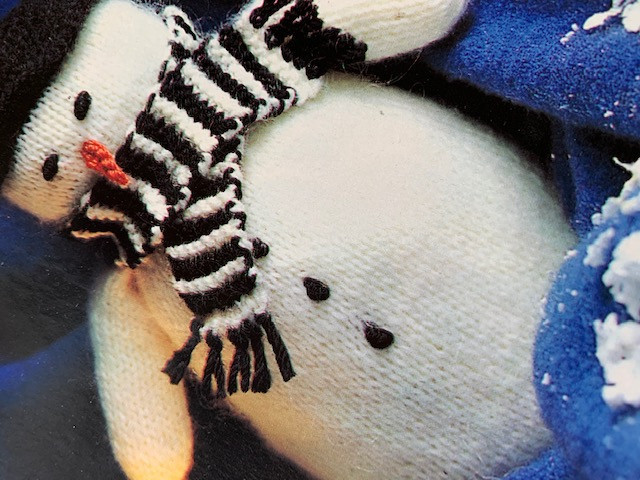 This free knitted snowman pattern will only take you an evening to knit and he is kept warm with his own garter stitch hat and striped scarf.  He is approximately 20cm high.

How To Knit A Snowman

Using the white yarn cast on 6 sts for the neck.

Dec 8 sts in this way on every k row until 8 sts rem. Thread end through rem sts, draw up and secure.

Using the black yarn cast on 6 sts for a hat. Work in g st.

Leaving the black attached, cont in the white. Beg k row, inc one st at each end of next row. 56 sts.

Dec 8 sts in this way on every k row until 8 sts rem. Thread the yarn through the rem sts, draw up and secure.

With RS facing and the black yarn, k up 54 sts along last black row.

Next Row: [k2 tog] to end. Thread yarn through rem 5 sts, draw up and secure.

Using the orange yarn cast on 4 sts then cast off these 4 sts.

Sew body seam, leaving an opening for the stuffing. Stuff firmly and join the opening. Make up the head as you did the body and sew to body. Join arm seams and stuff, leaving top 1cm unstuffed. Sew to the body.

Fringe the scarf ends, wrap around the neck and secure with a few sts.

Sew on the nose.

There you have it, a beautiful knitted snowman who is as snuggly as can be.