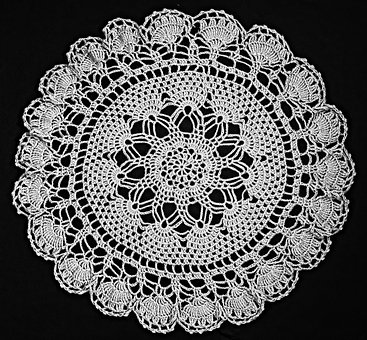 What is tatting with lace? Have you heard of tatting?

If you are a lover of needlework and crochet, you are going to absolutely love this hobby.

Tatting is a centuries-old technique for crafting lace, which is done by constructing a series of loops and knots.

This method is effective for creating lace edging in collars and other decorative items. The lace is then formed by utilizing a pattern of rings and chains, which are formed a half-hitch knot or cow hitch, over a core thread. Tatting is used for a number of practical as well as decorative applications.

This book on the left will provide you with some simple projects to explore the art of tatting to make lace.

The book also includes a few more advanced patterns. Simply click on the book to find out more about it.

The History Of Tatting

Tatting is an art form that dates back to the early 19th Century. The term ‘tatting’ was derived from the French word “frivolite” which denoted a decorative line of textiles, which were produced for this technique.

Tatting was primarily developed to mimic point lace patterns. Some historians believe that tatting was commonplace during the reign of Louis XV of France in the 17th Century, as carefully preserved paintings from that era showed women such as Madame Adelaide, who was the king’s daughter, to be wearing outfits that featured shuttle designs. However, historians were not able to fully evaluate this fact, and no documentation is present to authenticate that assertion.

Tatting continued to have a large following with the entry of the 20th Century. Most fashion magazines during the early part of this era featured women wearing outfits that had lace collars and cuffs, and also showed baby shower gifts that showed tatting designs.

As more modern fashion trends came in, new technology made lace an inexpensive and easy-to-acquire item, while hand-made lace became more expensive and quite rare.

Later, tatting flourished online, and online mailing lists such as eTatters and TatChat were formed in the mid-90s. These two popular online groups worked hard to promote the art of tatting, and this resulted in a revitalization of public interest in tatting worldwide.

Shuttle tatting is considered to be one of the earliest techniques for making tatted lace.

The shuttle technique involves holding a length of wound thread, and carefully guiding it through a series of loops, to create the required knots.

The shuttles (like the ones seen below) come in various shapes, sizes, and materials, and most often have a pointed hook at one end, to help in the proper construction of the lace.

Some tatting collectors are even known to have sought after antique shuttles, which date back to the 1800s as well as the 1900s.

Cro-Tatting on the other hand uses a combination of crochet and needle tatting.

The tools used for this technique involve a tatting needle that has a crochet hook at the other end. Cro-tatting can be done by using a bullion crochet hook, as well as a straight crochet hook. Cro-tatting is very popular in Japan, and a lot of people consider this to be more difficult than needle tatting or crochet.

For first-time tatting enthusiasts, you need to first familiarize yourself with the different types of thread used for tatting. The applicable thread types include crochet cotton, as well as mercerized cotton.

The threads can be bought in craft shops, as well as from online stores. Second, you need to obtain shuttles, and most of the modern shuttles sold today are made from plastic.

Here is a great tutorial that I found online.

There are several different types or styles of tatting work as stated above, that incorporate the use of different tools. Here is a more in-depth explanation of style.

Tatting Work With A Shuttle

This tatting style resembles the original version of knot-working craft skills sailors use to fix fishing nets, but the shuttles for tatted lacework are much smaller, and the threads are thinner and more decorative.

A cord or thread winds onto a spool on the shuttle. The tatter uses their hands to wrap the thread and manipulate the shuttle through the knot pattern to make a lacework design.

Using a shuttle can be hard for many people, especially those with arthritis or other joint issues, since holding the shuttle while working on the knots can become tiring. The best thing to do here is test out various shapes and sizes until you find one that feels good in your hands.

Needle tatting uses a needle stitch in place of a shuttle to make knots. Because a needle is much thinner than a shuttle, many crafters find needle tatting less stressful and more comfortable to manipulate through the thread pattern.

The needle is long and has an even thickness from tip to eye. The end of the needle is blunt so that you won’t prick your fingers. There are different needle sizes depending on what you are aiming to make.

Needle tatting projects require separate lengths of thread to use for making the knots since there isn’t a continuous length available as you find wound on a shuttle.

Crochet-tat is a blend between tatted lacework and crochet. Here you would use a small crochet hood to form your thread into knots.

The hook is a long blunt needle with a tiny hook at the end, much like the needle tatting style.

People who love to crochet love this style, as they feel comfortable with it very quickly.

So What Do You Need To Start Tatting?

You will first of all need to start familiarizing yourself with the threads that are used for tatting.

This Egyptian Crochet Cotton is a good example of one to start off with. Size 10 is the most common one for beginners.

Next, you will need some tatting shuttles, like the ones you see above.

You will also need some hooks.

Here is an example of a tatting kit that can be ordered online, so you don’t have to shop around.

Luckily there are so many videos online on different techniques, that you don’t even need to venture out of your house to learn how to do tatting.

Visit this site if you want some more information on tatting and how to get started.

10 thoughts on “What Is Tatting With Lace?”