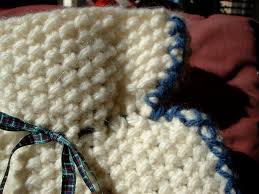 If you are wondering how to knit Moss Stitch, or even what Moss Stitch stitch is, then you can watch the video below, or simply read the simple pattern instructions that I have included.

What Is Moss Stitch?

Moss stitch creates a knitted fabric that has a lot of texture to it. Moss Stitch is also great for beginners, as you simply have to know how to knit, purl, cast on and cast off.

I am busy following a pattern to knit myself a baggy jersey. I bought the most stunning wool in an egg green color, that is a mix of bamboo and acrylic. It has a totally different feel to it, almost slippery.

Well, I started to knit the pattern last night and I think it has gone horribly wrong so far.

The pattern says to knit the jersey in Moss Stitch the entire time with the first row being knit purl, and the next knitting all the purl stitches and doing purl on all the knit stitches.

Five rows later, I noticed that my jersey looks like I am doing ribbing and not moss stitch at all, so I misread the pattern, or the pattern was badly written and I thought that probably lots of you do the same thing when it comes to knitting moss stitch.

On further investigation, I discovered that what I was doing was actually knitting Seed Stitch, but it wasn’t working out as I had an uneven number of stitches.

How To Knit Moss Stitch

For Moss Stitch, it seems you have to work 2 rows of the same sequence of knits and purls before you alternate them. Either that or you can knit with an odd number of stitches, and knit each row the same as the previous one, with one knit stitch and one purl stitch.

Moss stitch works best when you cast on an uneven number of stitches, and it is totally reversible once done.

On searching the internet, this is the basic pattern that I found for Moss Stitch, which is slightly different from the instructions given on the pattern I purchased.

Repeat rows 1 – 4 to create the pattern.

Remember when you knit one and purl one, you need to take the wool over the needle each time before you knit the stitch.

What Is The Difference Between Moss Stitch and Seed Stitch?

For more types of knitting stitches and explanations, click here.

So now you know how to knit Moss Stitch and hopefully won’t make the same mistake that I did.

In the end, knitting is really nothing more than pulling a series of loops through loops. How you pull the loops and the direction of the needle, the order in which you work the stitches, the colors you incorporate, and so on, contributes to the wide variety of fabrics that you can create.