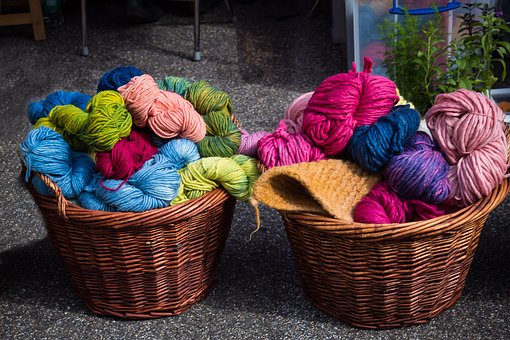 Did you know that there are different types of knitting?

Should I rather say there are two main styles of knitting and I am going to make a study of both of them, even though I have always done the English Style. I only recently found out that there is also a different type of knitting style called Continental knitting style.

In fact it may even be helpful to learn both different types of knitting for various reasons, including the fact that your joints can take a break from one repetitive knitting style while trying the other.

The most popular style of knitting seems to be the English knitting style. It is sometimes also called American knitting or throwing.

It is generally believed to be the neater style of knitting, as it is easier to control the tension of the wool.

English knitting involves holding the yarn in your right hand and “throwing” it over the needle to form the stitch.

Because this form of knitting can be exagerated, most people and beginners start to learn to knit with this style of knitting.

Although English style is used in most of the English speaking countries, it is also a very popular style in China.

Continental knitting is also known as German knitting or picking and is popular in northern and eastern Europe as well as other parts of the world where people from those locations have settled.

It is believed that Continental knitting was started in Germany and is even favoured in Japan. It did lose some favour during World War 2 because it was associated with Germany.

In this style of knitting, the yarn is in the left hand and a subtler movement of the left index finger (and sometimes other fingers as well) is used to help the needle pick up the yarn and form a new stitch.

Despite, the speed associated with Continental knitting, due to the angle of picking the yarn, purl is more difficult using Continental style. The reduced movement required means that Continental style knitting is better for anyone who suffers from repetitive stress problems.

So Which One Is Better?

I haven’t seen much difference in the quality of the work produced using both styles.

Continental knitting is believed to be the quicker method of knitting, but I suppose it all depends on which method you are used to.

Continenal knitting is also great for the left handed person, but as you need both hands to knit, I don’t think that it makes that much of a difference.

Even if you’ve been happily knitting in English or continental style for a long time, it’s worth it to learn the other method or to try one of the lesser-known styles.

For one thing, you can alternate knitting different ways on different projects, reducing hand and arm strain, in the long run.

Being able to knit both ways is also really great when you’re working with two colors of yarn in the same row. You can knit with one color in your right hand and one in your left and speed through the process without having the swap out yarns or deal with a big twisted mess at the back of the work.

It’s also fun to experiment, and who knows you may just develop a love for a new knitting style.